Marie Richardson grew up in Ljusdal in the Swedish province of Hälsingland, about 350 km northwest of the capital Stockholm. Ljusdal is a small community of a few thousand inhabitants and is mainly surrounded by forestland. In order to visit a professional theatre, one would have to go to one of the surrounding towns at least 50 km away. Marie's first experience with the theatre was aged seven, when she played the role of a nasty doctor in a school comedy. In an interview with Aftonbladet in 2002 she recalls, 'My interest in the theatre came into existence at a very early age. I tried it for the first time at an end-of-term celebration when I was seven years old. Then I felt it in my entire body.

Usually I was shy and a little uncomfortable, but the theatre filled me with an immense power. I felt I was in control and the audience laughed. I remember the focus in the room. It was quiet and then laughter. A very special feeling which I hadn't experienced earlier'.1 During elementary school her experience with theatre was sporadic, and it wasn't until high school she managed to become acquainted with acting on a more regular basis.

After her high school graduation Richardson managed to get accepted into the one-year course at Skara Skolscen in Västergötland, a drama school accepting around 25 students nationwide each year with the aim of providing a basic training in subjects such as stage performance, movement, speech, dance, fencing, history of theatre and culture and preparing their students for later admittance to the national drama schools. Former drama students at Skara Skolscen include writer Henning Mankell, actors Peter Andersson, Noomi Rapace, Allan Svensson, Rikard Wolff and Pia Johansson. Johansson was Richardson's classmate during their year at Skara Skolscen and together with Wolff the three performed during the celebration of the 50th anniversary of the drama school in 2012. 'At Skara I took my first steps into the grown-up world. It was an extremely significant year both professionally and socially' Richardson told a journalist. 'I doubt I would have been accepted at the Academy of Dramatic Arts if I hadn't spent a year at Skara first, understanding of how much cooperation is required in this profession. We lived for the theatre around the clock and didn't think it was enough with lessons from nine to five. So we made our own production of Little Red Riding Hood, which we toured with on weekends'.2 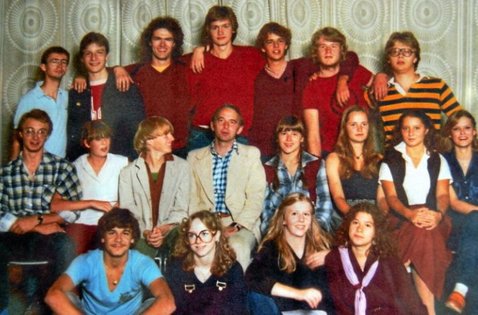 In this photo of the Skara Skolscen class of 1979-1980 Marie is at the far right in the second row and Pia is second from the right in the front row.3 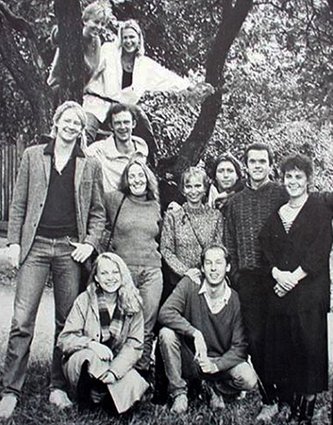 After Skara, Richardson moved to Gothenburg where she worked as a dresser at the Stadsteater (Gothenburg City Theatre), at the same time as she worked with various theatre groups and applied at drama schools both in Gothenburg and Malmö, before she was accepted at Scenskolan, the National Academy of Dramatic Arts in Stockholm, where she was a student from 1982 until 1985 along with her classmate from Skara, Pia Johansson, with whom she also shared a flat at Södermalm. What is popularly known as Scenskolan has its roots from the Drama School of the Royal Dramatic Theatre founded by King Gustav III in 1787 and is rich in tradition. Greta Garbo, Ingrid Bergman, Max von Sydow and Bibi Andersson, just to name a few, all graduated from this drama school. The formal name is now Stockholms Dramatiska Högskola (Stockholm Academy of Dramatic Arts) and in the 1970s it moved from Filmstaden in the northern outskirts of Stockholm to the southern neighbourhood of Södermalm.

In the photo of the class of 1985 at Scenskolan4: Squatting, left to right: Anna-Carin Franzén and Per Svensson. Standing: Staffan Lindberg, Anders Palm, Margareta Rylander, Anna Barlind, Kim Wesén, Jan Halling and Katarina Weidhagen. In the tree: Pia Johansson and Marie Richardson. Of these class mates, Pia Johansson has worked as an actress and comedian since her graduation, including being part of the permanent ensemble at Stockholm City Theatre for many years.

Since her graduation Marie Richardson has been part of the permanent ensemble at Dramaten, the Royal Dramatic Theatre, where she has been part of about 50 productions so far in Stockholm and on tour both in Sweden and abroad. Richardson's dramatic span is wide, covering anything from Euripides, Molière, Shakespeare, Ibsen, Chekhov, Strindberg, Albee, children's theatre and musicals to Pinter, Lorca, Enquist and Norén.

At Dramaten Richardson has worked with director Ingmar Bergman in seven plays from 1985-93, including Mishima's Madam de Sade, Ibsen's A Dolls House, Strindberg's Miss Julie and Botho Strauss' Time and the Room, and with many other directors such as Thommy Berggren (The Homecoming, 1993), Hans Klinga (The Taming of the Shrew, 1997), Danish director Peter Langdal (The Cherry Orchard, 1997), Karl Dunér (Platonov, 2005, and I Disappear, 2013), Mats Ek (in another production of The Cherry Orchard, 2010) and Gösta Ekman (The Miser, 2009). During the last few years she has taken a couple of leave of absence periods from Dramaten, performing at Stockholm City Theatre (Stockholms Stadsteater), Aarhus Theatre, Chinateatern and Maxim Teatern, succeeded by periods back at Dramaten. During the last years Richardson's stage work at Dramaten includes Swede Hollow, 2017, and The Witches, 2018, both directed by Alexander Mørk-Eidem, The Idiot, 2015, and Vi som fick leva om våra liv, 2019, both directed by the new head of Dramaten Mattias Andersson.

At Stockholm City Theatre Marie Richardson has been part of seven productions since 2007, including the main character Manuela in the stage adaptation of Pedro Almodóvar's film All About My Mother. In 2013 Richardson played Siri von Essen in P.O. Enquist's Night of the Tribades and Katarina in Norén's Demons, and in the spring of 2014 she played the titel role in George Bernard Shaw's Candida, also at Stockholm City Theatre. In 2011 Richardson played Queen Gertrude in a modern, unconventional production of Hamlet at Aarhus Theatre in Denmark, joining two other Swedes, Jonas Karlsson, who played Hamlet, and Stefan Larsson, who directed, in an otherwise Danish cast. In 2012 Richardson performed in a musical again, playing Marjorie Houseman in the stage adaptation of Dirty Dancing. And in 2016 she played Lady Macbeth alongside Michael Persbrandt's Macbeth at Maximteatern in Stockholm. A leave of absence agreement allows this mobility between theatres, as well as the periods during which actors are part of a television or film production.

On television Marie Richardson has played parts in both long-running tv-series, mini-series, tv-movies as well as stage productions adapted for television, such as Mishima’s Madame de Sade (SVT 1992). Early on, there was a slight tendency to typecast Richardson on television as the young, beautiful, slightly cold upperclass woman, unlike her stage performances, where she played a wide range of roles. This eventually changed, and Richardson has been a guest star in tv series such as Beck (SVT 1994 and TV4 2006), Maria Wern (TV4 2008), Der Kommissar und das Meer (ZDF 2009) and Kommissarie Winter (SVT 2010). Mini-series include Verdict Revised (TV4 2008), Morden (SVT 2009), The Half Hidden (SVT 2009), Walk the Talk (SVT 2010), Shed No Tears (SVT 2012) and Kungamordet (SVT 2008), the second part of Hanne Vibeke Holst's political trilogy. For the part as Linda Jacobsson in Kungamordet, who was the victim of domestic violence, one of the ways Richardson prepared for the role was to read about abused women and visit a women’s shelter.5

During the last couple of decades Scandinavian crime, and Nordic Noir in particular, has received international acclaim. Many of the books were adapted into films and tv-series, including Henning Mankell’s novels about Kurt Wallander. One of Marie Richardson’s recurring roles was Kurt Wallander’s colleague and partner Maja Thysell, whom she played in five of the tv movies/feature films based upon the ten original novels by Mankell. Maja Thysell was introduced in The Fifth Woman (SVT 2002). Because of the choices made in the adaptation from book to film, the plot called for a slightly different character than Wallander’s colleague Ann-Britt Höglund in Mankell’s original novel, so a new character was created.6 After casting sessions in Gothenburg and Stockholm, Marie Richardson was chosen for the part.

Richardson also had a recurring role in all of the Johan Falk movies, and currently plays police detective Hanna Svensson, one of the main characters in the TV series Before We Die (SVT 2017-19). British actor, writer and director Ricky Gervais was among the admirers of the series, ‘Just finished one of the best police dramas of all time. Innan vi dör, (Before we die), is as good as The Bridge & The Killing. Scandi-noir still destroying the rest of the world’ Gervais tweeted.7 Writers Nicklas Rockström and Wilhelm Behrman originally created the character Hanna Svensson with Marie Richardson in mind. 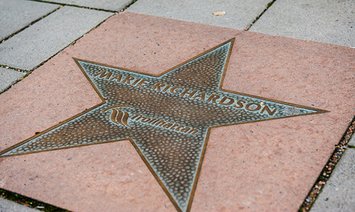 Trollhättan ('Trollywood') has been the basis for studio recordings for around 400 Swedish and foreign feature films since 1997. On the main street Storgatan in Trollhättan is a Walk of Fame with stars for 19 of the most renowned actors shooting films in the Film i Väst Studios. Marie Richardson’s star was among the original 12 stars from the inauguration in 2004 and is in the company of actors such as Rolf Lassgård, Pernilla August, Michael Nyqvist, Helena Bergström, Mikael Persbrandt, Stellan Skarsgård, Lauren Bacall and Nicole Kidman.8

[This page is under construction. Information about film work will follow].

8. Photo courtesy of Jonas Bergenfeldt especially for this website.